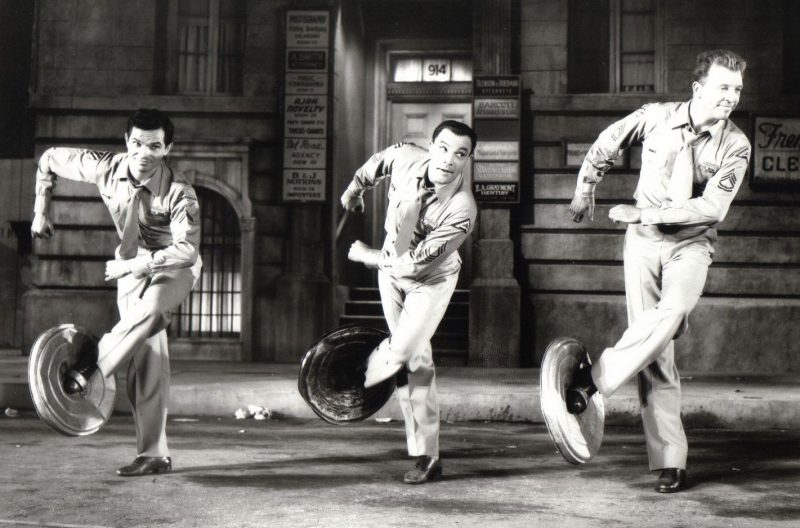 Asking why men can’t dance is a lot like asking why cats are better than men. In other words, there really is no exact answer either way. But there has never (to my knowledge) been a study on why men can’t (not just, don’t want to) dance… until now.

Studies suggest that women are attracted to men that know how to dance, and yet men continue to ignore this. Why?

I think that most men don’t believe dancing is macho; John Wayne, Sylvester Stallone, and Wesley Snipes can barely talk much less walk… and dance – forget about it! Real men can’t dance, at least this is the unspoken word that wavers across wedding celebrations and dance clubs as men jokingly perform the Robot, Sprinkler, and Nordic Track (lamer version of Running Man); showing off their manhood with their inability to dance. But before passing judgment, let’s hit the street and see what men in their 60s, 40s, and 20s have to say for themselves.

First stop is with the hula hoop and bobby sock generation of the 50’s; the answers were not surprising.

These two answers represent the typical answers I received. These guys have already landed their woman, so there was no reason to risk their manhood grinding their booties. But if age brings about wisdom, let’s see what the assumed less knowledgeable spectrum of men in their 40’s had to say.

I had one answer out of this spectrum that I feel represented this group as a whole rather well. His name was Bill and he was 45 years old at the time of interview.

Okay, I think it is safe to assume that I won’t be dating any Bill’s anytime soon. But the even bigger takeaway is that these men just aren’t listening to you, ladies. They certainly weren’t listening to me. I say let them buy their mid-life-crisis corvettes and BMW convertibles because at least in another 20-years they’ll admit they never liked to dance in the first place.

Now onto the up and coming generation – because I’d like to think there is still hope for them.

These men are the ones that you will see gyrating around in the clubs making ‘asses’ out of themselves… but the real question is why? My intelligence quotient says that they shake their booty to get booty, but they shake it poorly to let other men know they are there for the booty alone. Any man caught outside of home-base as described in the movie Hitch (2005), as swaying back and forth with your arms at hip level, is perhaps actually there to dance; which would be a scary thought to the average heterosexual male. As said before; real men don’t (can’t) dance.

Okay, so Tim definitely ‘gets’ that most of us women like to dance. The problem I see here is that men actually believe that they are fooling us with their unbalanced display of sporadic twitching. But we all know the problem is his failure to put any real effort into the motions. But what can us ladies do about it? Well, you can demand more from your man.

Challenge your man to take a couple lessons. Explain to him how most women believe that a man’s moves on the dancefloor are a reliable sample of what she can expect in the bedroom. Let him know that being a ‘real man’ is taking the time to learn new ways to satisfy you – both in and out of the bedroom. And if he seems disinterested, tell him you’re going to the dance lessons without him – and he’ll be following (dragging) right behind you.